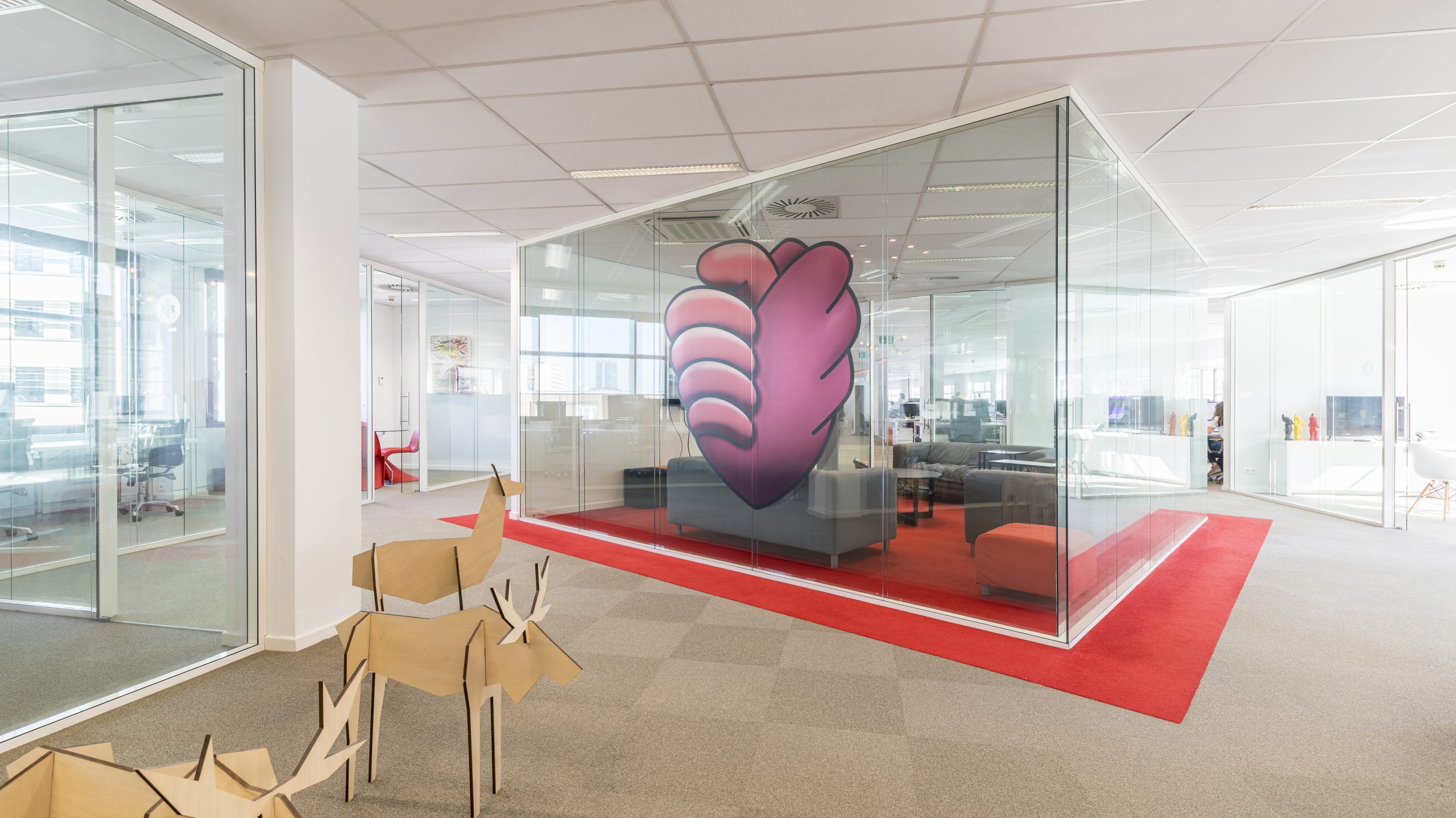 COVID-19’s continued disruption of real-world routine has propelled the uptake of virtual-world solutions. As more of our daily life, work, school and leisure time takes place at home, people are exploring new ways to communicate. Live online content is a compelling alternative to in-person interaction. It’s a new and effective way to connect colleagues, friends and family, learn a new skill, secure advice from a trusted hairdresser or receive a doctor’s consult.

As live video in particular continues to gain momentum, let’s explore the medium and the rich opportunities it presents for brands on social media. 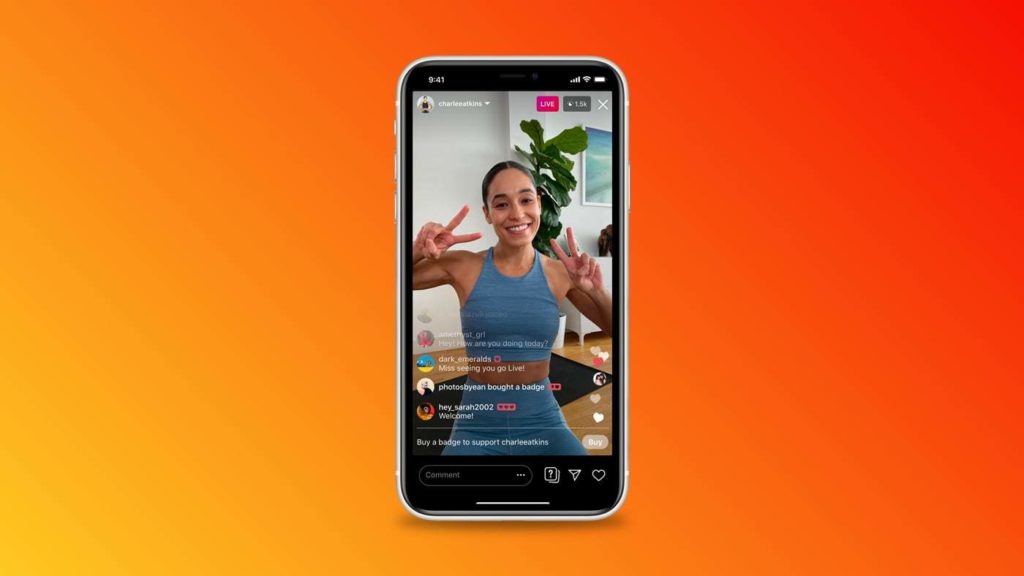 WHAT DOES LIVE MEAN TODAY?

The state of live

Research by the Interactive Advertising Bureau (IAB) [i] in 2018 had already identified a growing demand for live video worldwide. 67% of consumers were said to have livestreamed on any device or platform, with this percentage increasing to 90% in the MENA region.

Around the world, isolation measures in response to the COVID-19 outbreak dramatically accelerated the growth of live video. In China, over 60% of the population participated in livestreaming video [ii], while Italy observed a 100% increase in traffic to Facebook and Instagram Live [iii]. In the USA, Instagram Live usage grew by 70% in the first month of lockdown [iv], while Facebook and YouTube livestreams increased by nearly 40% and 20% respectively in the first two weeks [v].

Live is increasingly being adopted in all kinds of environments. The gaming live-stream industry grew by 45% between March and April [vi]. Videoconferencing services surged, with Zoom usage up by 151% from the previous year, and Microsoft Teams more than doubling its daily active users compared to November 2019 [vii]. The music and entertainment industries have gone all out, with the rise of livestreamed concerts (such as ‘One World: Together at Home’), cloud party concepts[viii] and China’s new TV genre of cloud reality shows [ix]. Sports fans have been able to experience new event formats like the Tour of Flanders cycling livestream event [x] (with over 600k viewers) or the ‘Stay at Home Slam’ tennis event on Facebook gaming.

Tech platforms have been quick to respond to the growing popularity of livestream activities by updating and refining their offerings:

WHAT DOES LIVE MEAN FOR SOCIAL?

Despite high attention volumes and enhanced functionality of the livestream experience, only 35% of marketers have officially integrated live video into their social media strategies [xii].  Here’s what the rest are missing out on:

Facebook has introduced shopping features for the Facebook and Instagram live platforms, as part of the launch of Shops, its new ecommerce offering. Brands, content creators and influencers will soon be able to tag products and services when they livestream, enabling viewers to shop live content directly. 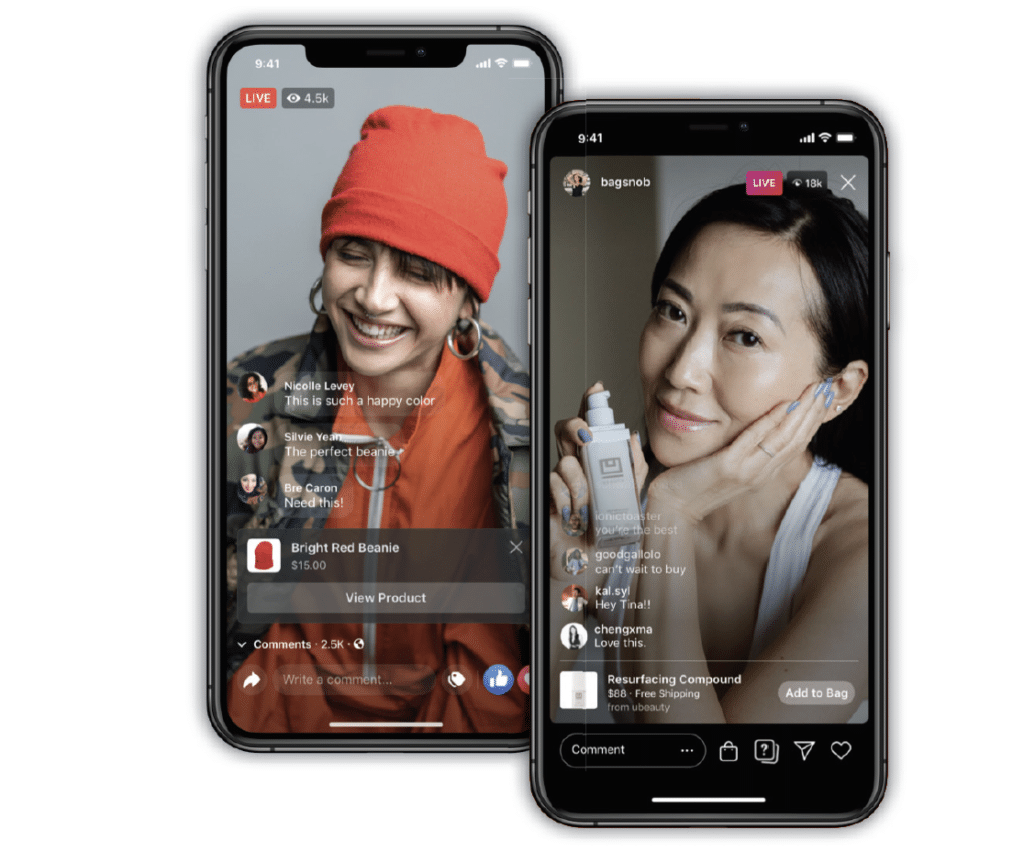 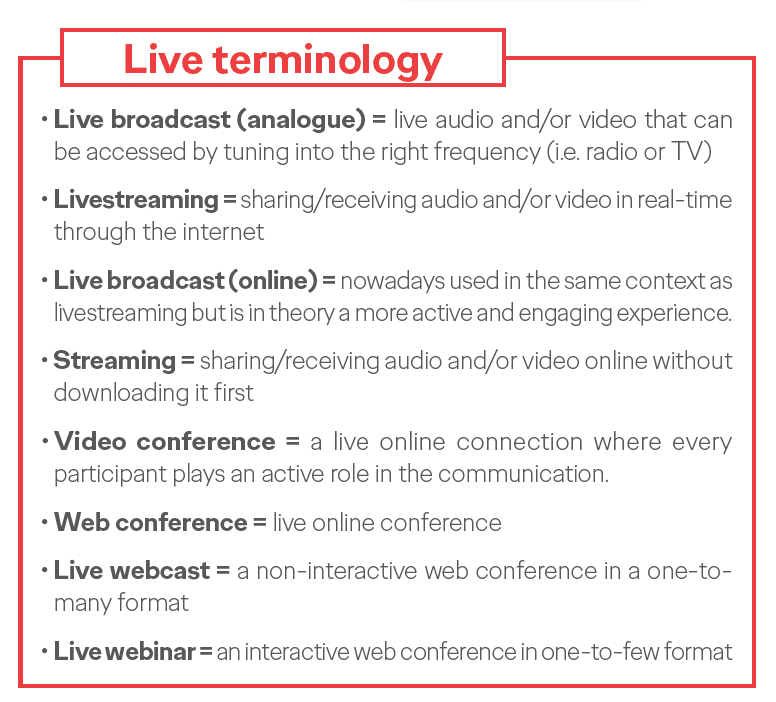 As live gaming and eSports audiences continue to grow, popular streamers are reaping the benefits of heightened fame. Major platforms continually jostle to attract top personalities and their loyal fanbases of millions of viewers. In 2019 Facebook Gaming’s total hours watched grew by 210%, driven by deals with high profile streamers like Disguise Toast and Corrina Kopf [xvi]. Mixer, Microsoft’s now-defunct gaming platform, reportedly paid between 20 and 30 million dollars for an exclusivity deal with streaming superstar Ninja. The appeal extends to top brands, who are also recognizing the potential in collaborating with gaming livestreamers. For example, Red Bull’s partnership with Ninja generated 235 million interactions on branded content in the first six months of 2019 [xvii]. 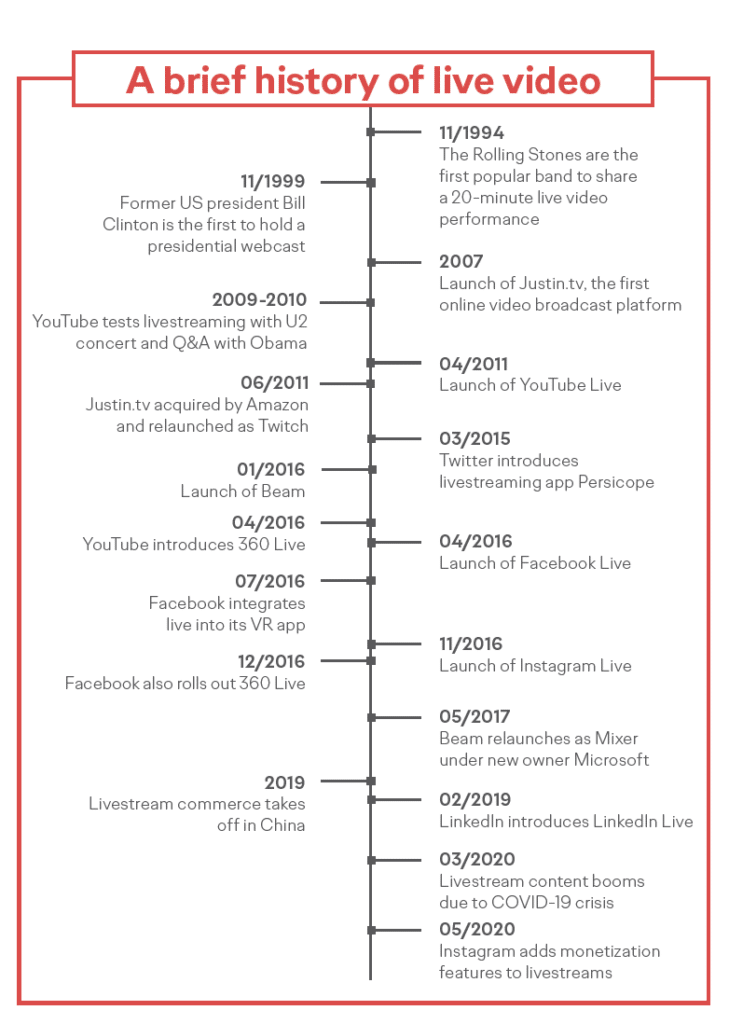 Given that potential customer audiences are more drawn to live video than other social formats [xviii], well-executed live content offers rich opportunity for brands to enhance their presence on social media.

Live content allows brands to create exciting or exclusive real-time experiences with immediate audience response that creates live dialogue.  This real-time interaction is one of livestreaming’s most appealing features, and a top drawcard for audiences who love the medium [xix]. Brands can also share company updates, hot takes on industry news or new product and service announcements, and respond directly to questions and comments, whilst gathering valuable audience insights.

90% of consumers say that brand authenticity is key to winning them over [xx] and authenticity is what sets live content apart from standard online interaction. The immediacy of the live environment lends itself to a more human and transparent communication style, with room for improvisation and direct audience dialogue. It’s a chance to show customers what makes the brand unique from the inside out. Invite the audience into parts of the business they don’t usually see, introduce them to engaging staff personalities, host live demos or create direct Q&A access to company leadership and experts. 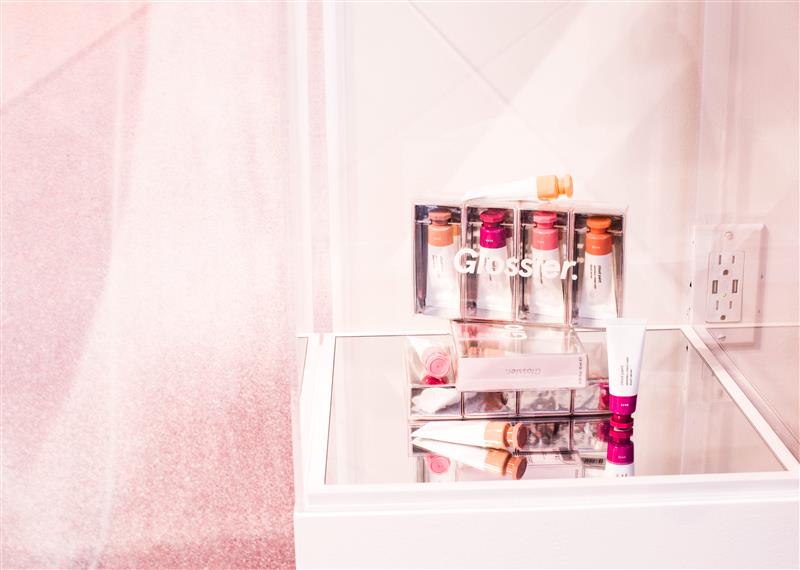 With its customer base under home confinement due to COVID-19, DTC beauty brand Glossier turned to live content with the launch of Glossier Live Edit. Viewers could ask beauty-related questions and share their personal product experiences with Glossier experts in real-time consultation.

3.  Let the audience take the wheel

Live interaction gives brands the opportunity to give more control to their audiences and let them request, influence and participate in content.

This empowers businesses to deliver content of true value to consumers and can result in powerful insights to fuel future communication strategy. This approach is especially effective when targeting Gen Z audiences, who are known to ignore irrelevant content and prefer to be more active contributors to brand experiences.

Porsche let its audience unveil the new Formula E car through an interactive game on popular livestreaming platform Twitch. A great case study in building hype and through real-time engagement.

Globally, 25% of livestreamers typically like to watch online influencers go live, with the figure rising to 38% in China [xxi]. In reality, this number is even higher because the data does not reflect gaming and eSports livestreams where influencers have a massive impact. During the COVID-19 crisis, many brands worked with influencers as a way to stay connected to audiences and unify communities. A Gamesight study [xxii] found that in March and April 2020, sponsored content on Twitch increased and generated higher viewer engagement.

E-commerce thrived in the wake of COVID-19 as physical retailers were forced to suspend activity in many markets. Now that companies and customers are accustomed to online trade, fueling sales through social is even more important to the marketing mix. Forbes [xxiii] adds that “strengthening the link to social media, in a time of social selling is imperative.”

Livestream commerce is the latest trend in social selling, driven by huge success in China, where brand stores or so-called Key Opinion Leaders (KOLs) select and promote products in real-time. Viya, one of China’s most popular KOLs, hosted livestream shopping nights with around 37 million viewers, reportedly generating $5.6 million in sales in April [xxiv]. E-commerce players like Alibaba are active in the space, as are major Chinese social platforms including WeChat, Weibo and Douyin (TikTok). Livestream commerce is expected to take off in western markets as well, evidenced by Facebook’s recent addition of shopping features to livestream content and Amazon’s introduction of Amazon Live last year.

VR and AR technologies have been in the market for a while, but their potential remains largely untapped by brands. Again, thanks to COVID-19 energizing new experimentation with digital, brands are increasingly exploring immersive technologies for live experiences.

Fashion brand Lanvin hosted a cloud fashion show, using VR to offer viewers a virtual front-row seat and inviting influencers to livestream the show with behind-the-scenes content. In addition, fashion fanatics could access a virtual shopping experience which enabled instant purchase through social media [xxv]. Asics applied live VR to PR, sending out Oculus Quest headsets to journalists with an invitation to participate in a virtual shoe launch, including an interactive game that highlighted the shoe features [xxvi].

The live video space has been gaining momentum in 2016 but is now swiftly accelerating thanks to a surge of attention and innovation in 2020’s unprecedented times. As people continue to spend more time at home and online, live video enables brands to maintain connection to their audiences through interaction and community, when effectively executed as part of a wholistic social strategy. A range of marketing efforts can be supported through live online experiences, from new product launches to driving consideration to sales and customer service, all in an authentic, transparent, and engaging way. The space is growing from strength to strength with exciting new developments livestream commerce, VR and AR bringing increasingly fertile opportunity.

Edited by Catherine Sackville-Scott and